Halfway up the stairs... 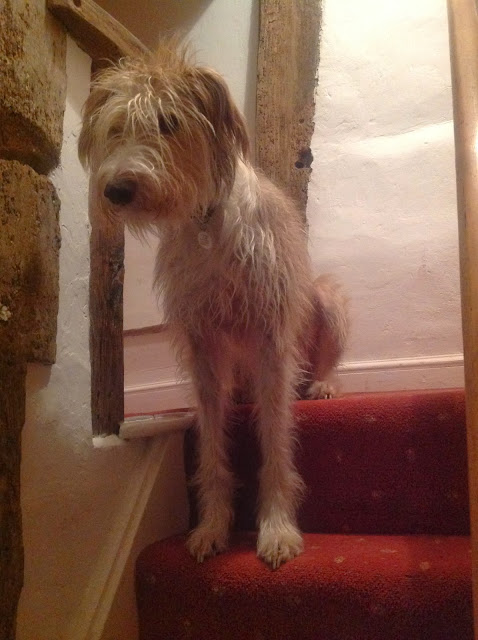 Halfway up the stairs is the stair where I do sit.

I sleep on this landing when my Mum and Dad go to bed.

Note rickety old oak beams, this house is full of them! 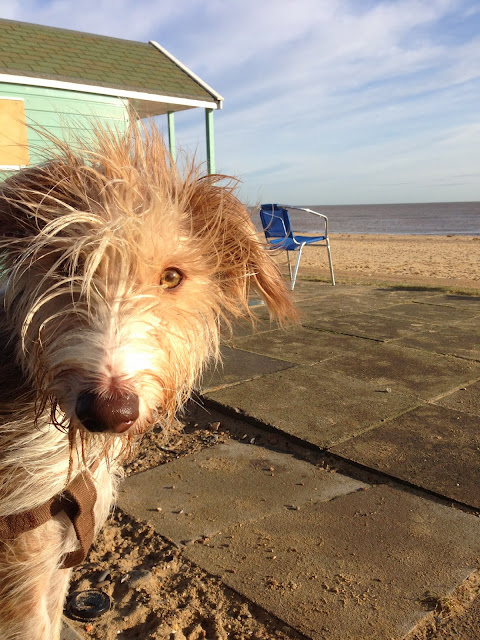 Amazing crisp sunny December Sunday running on the beach in Southwold ~ this is why we moved to Suffolk!

Unfortunately we did have the terrible storm last week so some of the beach huts look a bit worse for wear... 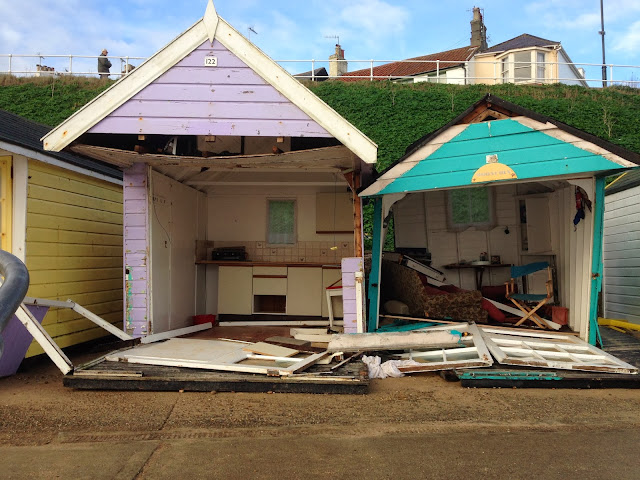 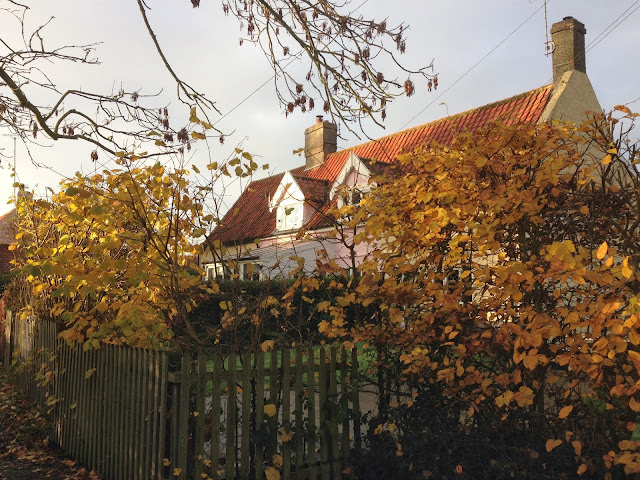 After 28 years living in Tring in Hertfordshire, on 26 November 2013 Mum and Dad finally fulfilled their long held dream of moving nearer to the coast by moving to the small village of Brampton, near Beccles in Suffolk.

That means we can drive to Southwold in just 15 minutes!

Our house is the farthest one of the three into which this 17 century Suffolk long house has been divided.

It's so quiet here, no traffic, just the occasional squark of a frightened pheasant... The farmer has cut the grass in our field over the weekend so now we can run around again and 'hay' - they even added some climbing equipment for me to play on!

The grass has been soooo long, up to Mum's waist, it made it difficult to run around in the field, but now I can tear about with my mates and get all hot and flustered.

Isn't summer wonderful - why don't we have this every year?!

Hi, Bert's Dad here. I was fascinated by your reference to Tumblers Kath, we use the term with Bert because of the way he tumbles into his quarry [his friends] in an attempt to knock them off their feet, little knowing that there was some truth to the description!
So I've done a bit of Googling and found this goldmine of information at http://www.lurchers.org.uk ~ a site "...dedicated to "THE LURCHER & TUMBLER WELFARE & BREED CLUB".
Here's are a few snippets from the history section of the site:
The Lurcher and Tumbler types of athletic hunting dog's function was to provide meat for the cooking pot, by using a combination of stealth, brain, nose agility and speed. They hunted by both scent and sight being more fundamental and ancient than the specialist pure Sighthounds. They have occurred throughout the whole world since time immemorial.
Originally, the same dog would be called a Greyhound or Lurcher depending upon whether owned by a Norman Lord or an outlaw. It is the modern Greyhound which has moved away from the original type by becoming a pure Sighthound sporting dog.
There are no accurate historical references to Lurchers or Tumblers, because their function was illegal and their outlaw masters illiterate...
The descriptions ( because that's what they are) Lurcher and Tumbler originally differentiated between two styles of taking their quarry employed by stealth poaching dogs, whose function was to fill the cooking pot. The penalty for detection was execution for man and dog. Sagacity, loyalty and trainability were indispensable and they resided, out of sight, inside the dwelling as part of the family.
So thanks for the lead Kath, it's great to find out a bit more about this ferocious beast we keep hidden away in the house! 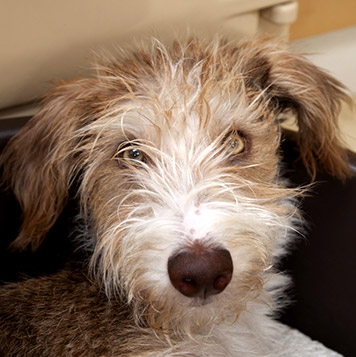 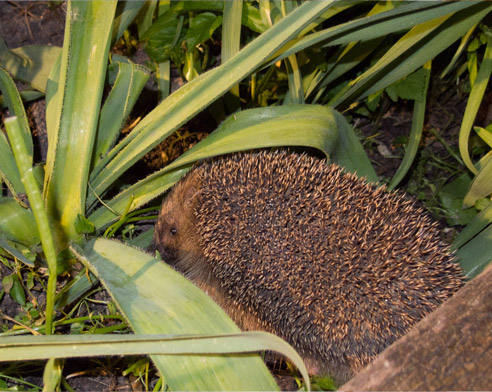 As I wandered out into the garden on Thursday evening for my bedtime wee stop, I noticed a movement on the path and quick as you like I went to investigate...
Mum said it was a hedgehog. Looked a bit dodgy to me!
It scrambled into the nearest flowerbed when it saw me coming, then sat very very still.
I think it was probably waiting for Mum to fetch Dad with his camera...

Posted by Bertie the lurcher at 01:56 No comments: 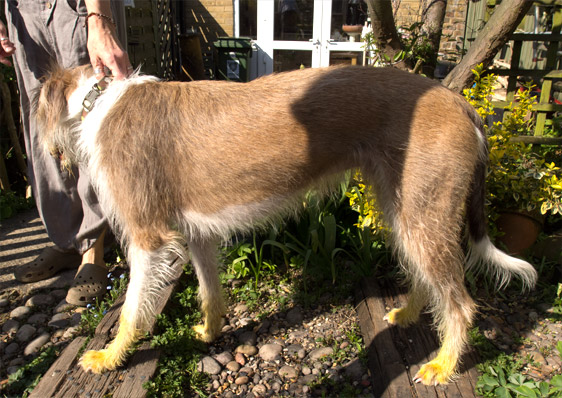 What a wonderful May Bank Holiday morning, warm and sunny
and who could tell that the field is full of dandelions!
What do you think to my new socks? 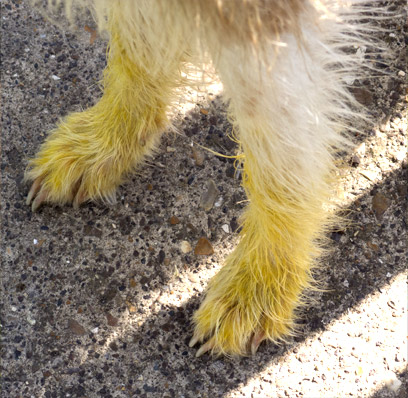 I shall probably keep these for a few days now - I think they suit me!

My mum was a mixture of Saluki, Bearded Collie, Greyhound.
My dad was the famous 'Hancock's John Dog’ 5/8ths Collie 3/8ths Greyhound.
I have them to thank for my gorgeous good looks!

When I was a pup, on the 15th June 2011, I moved to Tring in Hertfordshire to live with my new Mum & Dad, the Mitchell-Finch's.
I'm very happy here. We have two fields at the end of the garden and I can go tearing about with my friends at least three times a day when they take me out for a walk.